West Ham’s official bid for William Carvalho was in fact launched, but has DS lied again?

A leaked email showing David Sullivan & West Ham’s official bid for Sporting Lisbon’s William Carvalho, was revealed late last night, via Sky Sports News. Although no official confirmation has shown how ‘SSN’ came into possession of the document, it does reaffirm David Sullivan’s official statement that we did in-fact bid for the player. 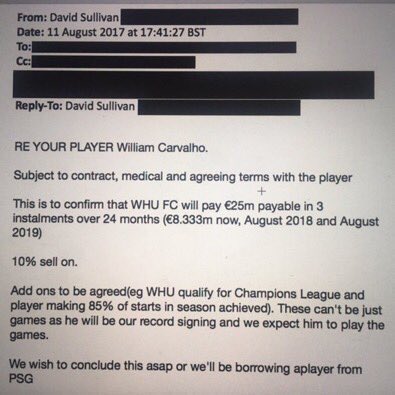 Earlier this week, following the close of the summer transfer window, an official statement on the club website from co-chairman Sullivan read:

"It is no secret that we made a club record bid for Sporting Lisbon’s William Carvalho but unfortunately that offer was rejected a couple of weeks ago.

"Late last night Sporting Lisbon made contact to accept the original offer, but unfortunately it was just too late in the day, and we simply did not have enough time to put the player through a medical.

"We were not prepared, as a club, to buy a player for that amount of money without him having gone through adequate medical checks.

However, contrary to the statement, Sporting's communications director Nuno Saraiva claimed Sporting never received any such proposal from West Ham for Carvalho.

The club are now commencing legal proceedings in regards to the comments made.

"No proposal arrived for the player William Carvalho.

"Mr Sullivan has a duty to prove what he says. For this reason, Sporting Clube de Portugal challenge him to publicly show the proposals he says have been made, as well as the evidence that Sporting CP has received them."

The alleged email does in-fact prove Sullivan offered just under £23m for the Portuguese midfielder split over three years, whilst offering £8.3m up front for the first year, before making a follow-up offer which included a 10% sell-on clause and additional add-ons based on West Ham qualifying for the Champions League.

As the war of words rages on, has co-chairman Sullivan accidentally put his foot in it?

As part of the statement on the official site, Sullivan spoke of other potential targets Grzegorz Krychowiak and Renato Sanches, claiming Slaven Bilic rejected the chance to sign the pair:

"Grzegorz Krychowiak and Renato Sanches were both offered to the manager before their switches elsewhere, but he told us that he is happy with the squad he has.”

However, within the official email that was submitted, Sullivan wanted the deal wrapped-up ASAP, otherwise they’d be ‘borrowing’ a player from PSG - Krychowiak.

It’s almost as if West Ham were confident of landing Carvalho, before resting on their laurels and missing out on the Polish international to fellow Premier League side, West Brom, not the other way around?

It’s been well documented in the past with both co-chairmen criticising Slaven Bilic in the public eye, with this latest transfer saga seemingly throwing him to the wolves once again.

It also proves that it was Carvalho OR Krychowiak, not both which was hinted at in the statement by the chairman.

Net spend, where IS the money?

West Ham ranked 14th in terms of net spend this summer at £14.6m, with outgoings at £39.2 and incomings of £24.6. If you take it back to January 2017, with the sale of Dimitri Payet and acquisition of Robert Snodgrass from Hull, the net spend would sit roughly at £4m.

Why mention net spend you ask?

If the budget reported at the start of the summer was in-fact accurate, coupled with the sale of Upton Park, increased ticket revenue due to the capacity of the London Stadium and more importantly the bumper new TV deal, why are we tabling such a low-ball, embarrassing, three year £8m offer, for such a top-tier player?

Now, with the information made available to the general public and a continental slanging match underway, both chairman have once again succeeded in making West Ham an absolute laughing stock in the eyes of World football.